Marring Tech and Art: Steve Johnson on the magic of his fist Mac-and how it changed his life

In the fall of 1986, during the first week of my freshman year of college, my cousin took me to the university computer store to help me buy my first Macintosh. The Mac platform was two years old at that point, and Apple had just released a new machine called the Mac Plus that featured a then-staggering 1 megabyte of RAM. (In today's mileage, that would be just enough memory to store the first few verses of a Katy Perry song.) But the Mac did not yet offer a hard drive, and so my more tech-savvy cousin told me to buy a 10-pack of floppy disks as well. 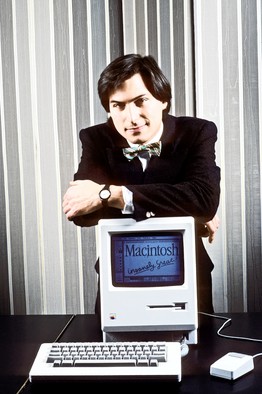 Contour/Getty Images
Steve Jobs with a Mac in 1984. The screen felt 'like a space you wanted to inhabit.'
I looked at him with astonishment. I was an art kid, not a techie. I needed a computer to write plays and short stories and term papers. The computer was just a tool, nothing more. "Why would I ever need 10 floppy disks?" I asked. "I just need one disk for my Microsoft Word files." My cousin smiled, knowing full well where I was headed. "Just buy the disks. Trust me."
He was right, of course, and to this day whenever I call him up to tell him about my latest computer purchase, with its terabytes of storage and gigabytes of memory, he laughs and says, "Just one disk. That's all I need."
But that first Macintosh did much more than expand my data storage needs. It also fundamentally changed my relationship to technology—and in doing that, ultimately changed the course of my life.
It's hard to remember now, but in the mid-1980s—before Wired Magazine, Pixar, dot-com start-ups, celebrity tweeting—being obsessed with your computer had almost no cultural cachet. You were just a nerd, full stop. The computers of the day had all the playfulness of a tax audit, and the creative people who used them did so begrudgingly.
But one look at the Mac and you could tell something was different. The white screen alone seemed revolutionary, after years of reading green text on a black background. And there were typefaces! I had been obsessed with typography since my grade-school years; here was a computer that treated fonts as an art, not just a clump of pixels. The then-revolutionary graphic interface made the screen feel like a space you wanted to inhabit, to make your own. To paraphrase Le Corbusier, the Mac was a machine you wanted to live in.
Before long I was creating page layouts for student-run philosophy journals; I designed research tools using the visionary Hypercard application; I embarrassed my friends by showing them new screensavers and games at parties where everyone else was talking about Derrida and David Lynch.
Looking back now, I realize that beneath all those surface obsessions, a theme was running through my interests like an underground river, and it didn't fully surface until my mid-20s: the sense that the most fertile and engaging space in our culture lay at the intersection between new technology and the humanities.
In a funny way, the Mac played the same role for me that "Catcher in the Rye" or "Easy Rider" played for earlier generations: Experiencing it expanded my consciousness in ways that took me years to fully understand. Almost all my engagements with the technology world since then—the books I've written and the websites I've created—have been animated by the basic principle that digital machines work better when they are crafted and interpreted by people whose sensibility is shaped by the world of culture as much as that of technology.
At the very end of his 2010 speech at the iPad's debut, Steve Jobs mused on the secret to Apple's success: "It's in Apple's DNA that technology alone is not enough. It's technology married with liberal arts, married with the humanities, that yields the results that make our hearts sing." He illustrated it with the image of a street sign at an imagined intersection between "Technology" and the "Liberal Arts." He meant it as a description of the kind of thinking—multidisciplinary, sensitive to human needs and potential—that created the products. But it also describes the broader social impact of his company. Before Apple, that intersection was largely deserted. Today it is a virtual Times Square.
The genius of famous innovators and CEOs is often exaggerated: Most fortunes are built on good fortune as much as sheer brilliance, and invention is a collaborative art. But there is no contesting the fact of Steve Jobs's genius—just a debate about its defining qualities.
I worry that we miss something in hailing him as either a master salesman or a master designer, though he is clearly both. His real gift, from an early age, has been the ability to see that these two worlds could, and should, productively collide. It isn't just that he made computers cool or put them in pretty boxes. It's that he put those computers in new conceptual boxes. A machine originally designed for processing equations and building bombs turned out to have a wonderful hidden potential: for song, laughter, poetry, community, family.
Mr. Jobs had plenty of help, of course—at Apple and elsewhere. The layered, open platforms of the Internet and the Web have ultimately solidified the computer's place at the center of human culture and expression. The digital revolution has always been a networked affair, even before there were networks. But no single individual exemplifies that change more than Mr. Jobs does.
When I heard the news that he was stepping down from Apple, the image that flashed in my head was of a kid in a computer store trying to save a few bucks by skimping on floppy disks. I suspect my own story is not so unusual. There is, on the one hand, the simple, factual accounting of it: Steve Jobs persuaded me to buy a lot more than 10 disks over the years. But the other hand is so much more interesting: all the wonderful, unexpected things that he got me to put on those disks.
—Mr. Johnson is the author of seven books, most recently "Where Good Ideas Come From."
Posted by Phillip David Pierce at 9:57 AM